The weather forecast for today called for mostly cloudy with occasional showers.
Definitely seems like a Road Trip day!!
Bill and I had traveled through Acadia back in 2002.
One of our favorite memories was of Schoodic Peninsula,
the smallest section of Acadia National Park.
Most of Acadia NP is on Mount Desert Island.
Schoodic Peninsula is on the mainland across Frenchman Bay just south of Winter Harbor. 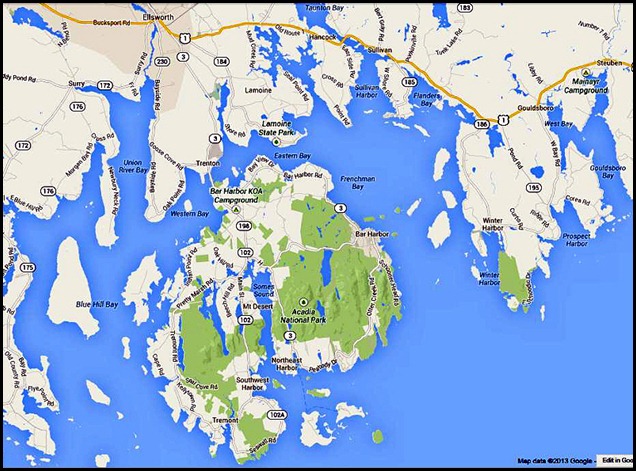 The whole gang wanted to go and we managed to get all seven of us in the Tahoe.
We just put the kids in the trunk;o)) 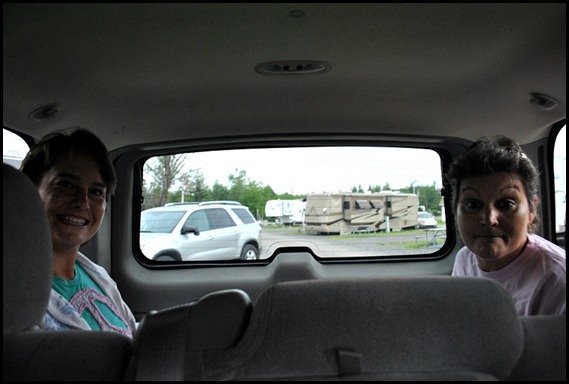 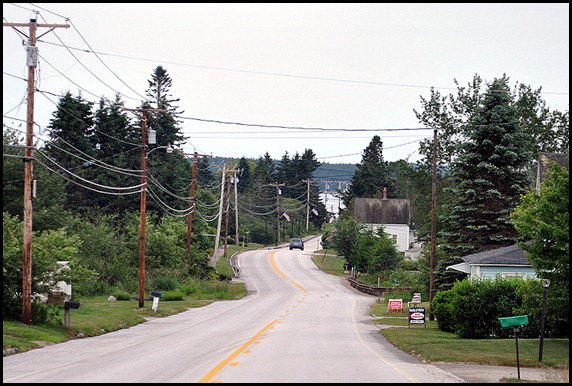 When we reached the national park, our first stop was at Frasier Point.
We got out to stretch,  use the restrooms, learn a little bit and enjoy the views.
(click on any photo to enlarge) 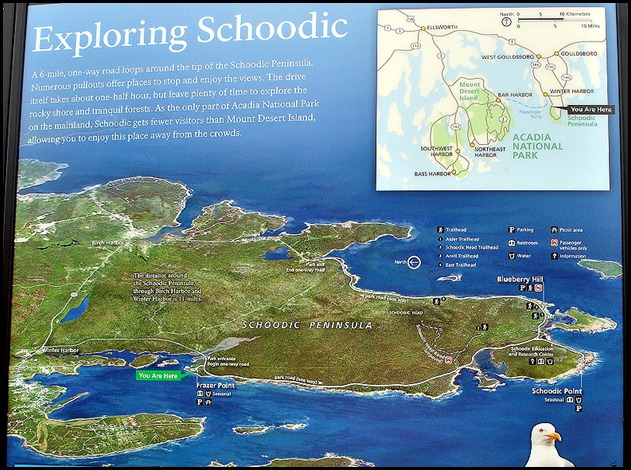 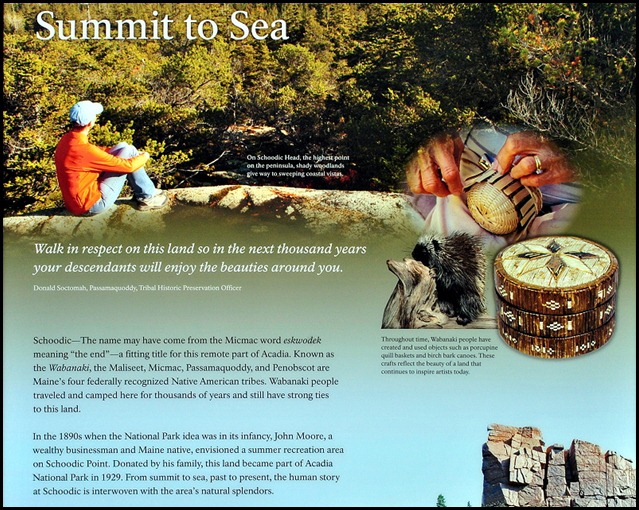 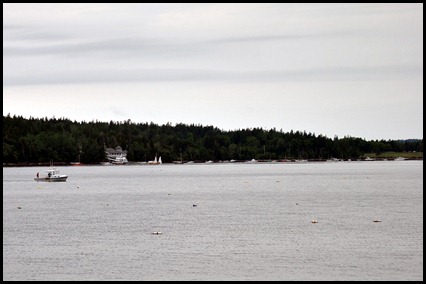 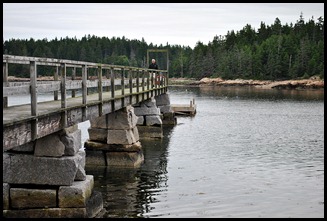 One of those occasional showers started so we hopped in the car and moved on.


Of course, the kids could not get their muddy shoes on Bill’s carpet;o)) 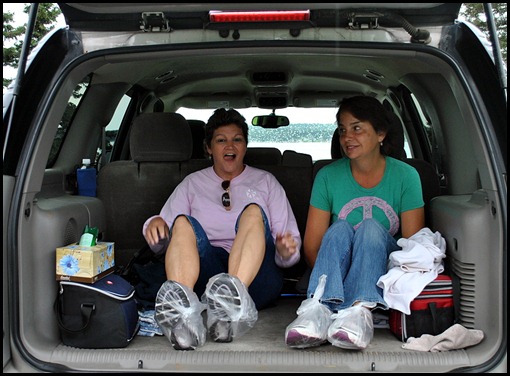 Just down the road was the Schoodic Education and Research Center
. 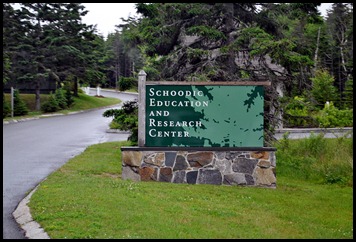 A United States Navy base, Winter Harbor, operated on Schoodic Point from 1935 to 2002.  The base operated as a radio station and training facility until it was decommissioned and transferred to the National Park Service on July 1, 2002. The former naval base has now been transformed into the Schoodic Education and Research Center, a research and training center for the National Park Service.
We rode through the center, but there were no public access buildings.
We thought we might find a museum or nature center.
We did stop to see if this gorgeous building was open… NO:-(( 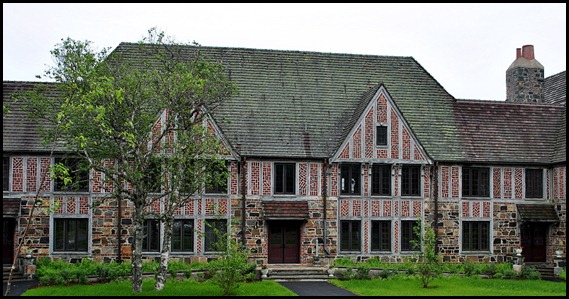 So we continued down the road to Shoodic Point!! 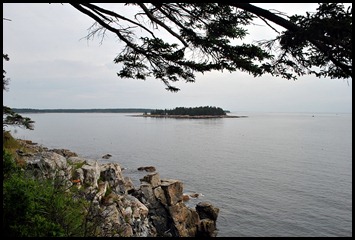 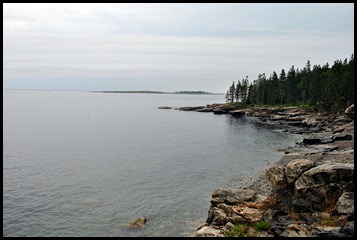 Our most vivid memories of this spot in 2002
were the huge waves crashing over the rocky coastline.
Unfortunately, there wasn’t even a ripple in the water today;o((

We continued around the loop and back to Frasier Point to enjoy our packed lunches. 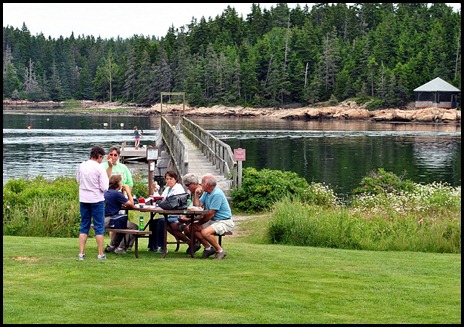 From our picnic table we could see Winter Harbor and working lobster boats. 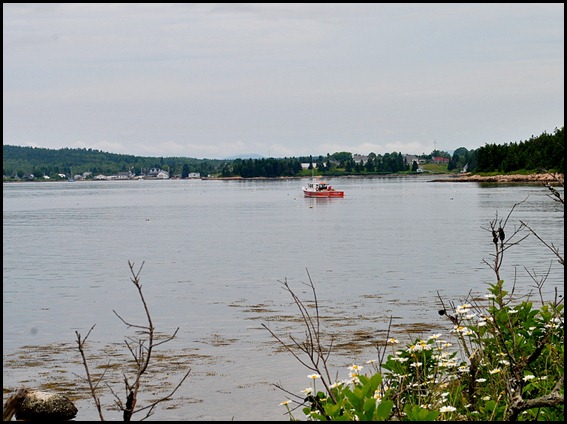 There were Daisies blooming everywhere:o)) 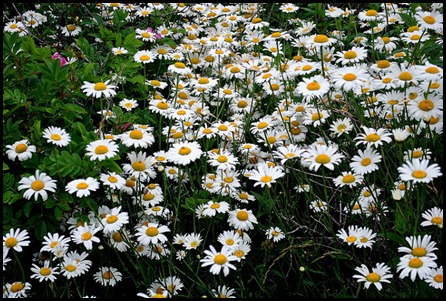 After lunch, we made one more trip around the Schoodic Peninsula Loop.
We were looking for the road to Schoodic Head, the highest point on the Peninsula.
We missed it first go ‘round, but found it and went to the top this time. 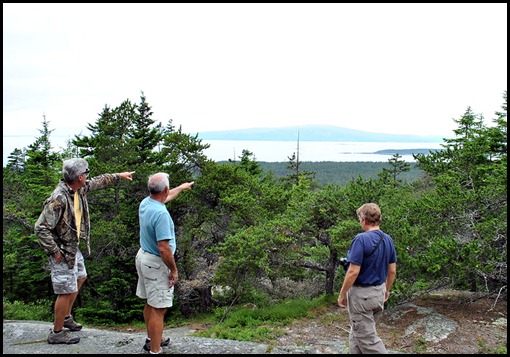 The view was beautiful, but limited due to lots of tall trees.

We had hoped to do a bit of hiking, but the weather was not cooperating.

So it was time to head back to the campground.

He quickly made a U-B and we were buying a pie:o)) 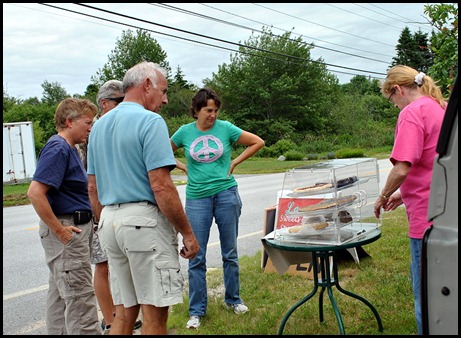 You see these little stands all over the roads.

That still is a great price for a homemade pie!!!

Before we left this morning,

I started a pot of 15 bean soup in the crockpot.

It was more than enough to share with everyone for dinner.

We also invited Karen and Al, who are RV-Dreamers work camping in the area.

Somehow, I never managed to get a photo of dinner;-(( 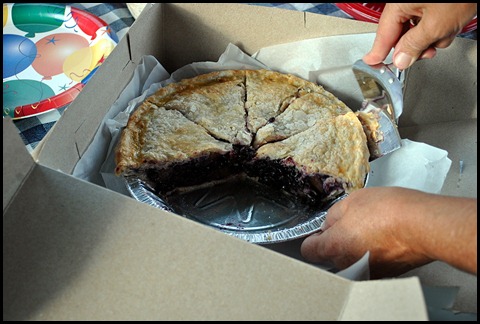 This piece is looking a little bit better;o)) 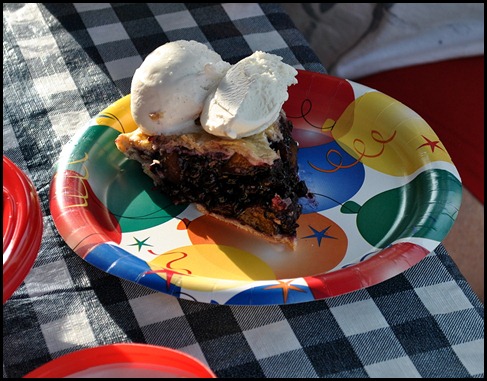 After dinner and dessert, it was time for a campfire!! 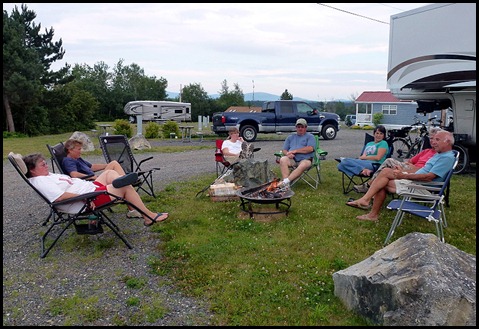