We stayed at Jonathan Dickinson State Park for 11 days. Gin and Syl arrived a day after us. Unfortunately, they both contracted “The Flu” at Disney World;o(( So they just stayed put and spent several days kicking the bug!! A little later in the week, Dan and Tricia arrived. Rather than do a day by day account, we will cover our stay here by topics.  Click on any link below to go to that topic.

When Gin and Syl were feeling better, we decided to pack a lunch and take a driving tour of Jupiter Island.  It was a 23 mile loop around Hobe Sound and through Jupiter Island. 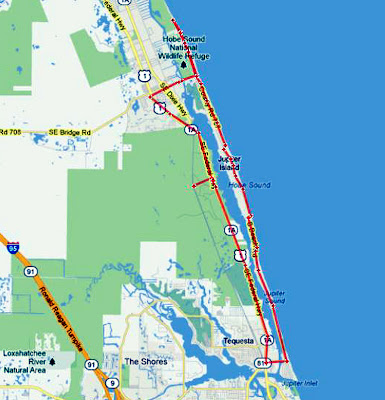 Jupiter Island is one of those “Lifestyles of the Rich and Famous” places.
We started our tour driving south with the first stop at Jupiter Lighthouse. 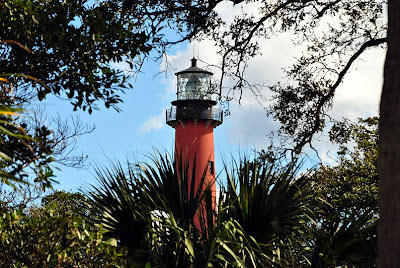 While we were on the lighthouse grounds, we watched the drawbridge over Hobe Sound open and allow a tall sailboat to pass from the Ocean to the Sound.  Then we crossed the bridge onto Jupiter Island.  The wonderful landscaping at the bridge was just the beginning of a beautiful ride. 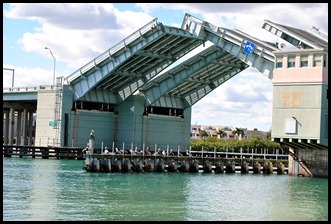 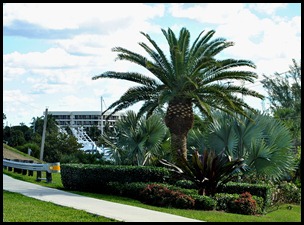 Our original view of Jupiter Island from the top of Hobe Mountain Tower allowed us to see some very large mansions on the island.  I pulled a couple photos from the internet to give you some idea of the type of homes we would NOT see.
Tiger Woods' Home and 3 golf holes!! 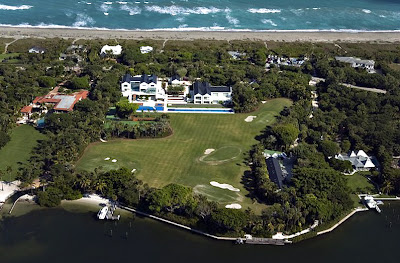 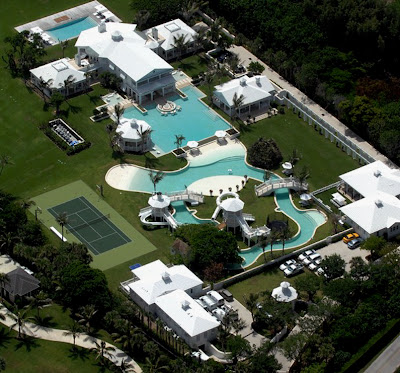 ﻿
Yes, we passed driveway after driveway, but most of these monster homes were tucked down long driveways and sat behind very dense but gorgeous landscaping. 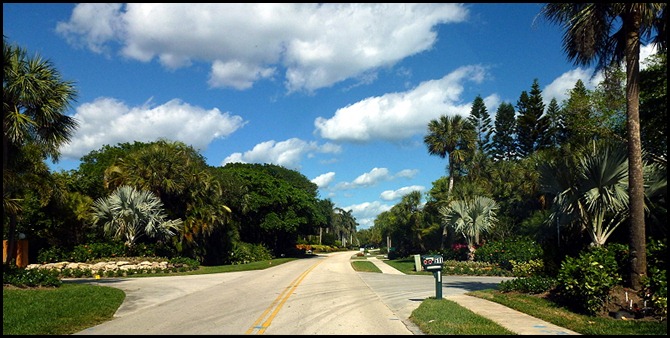 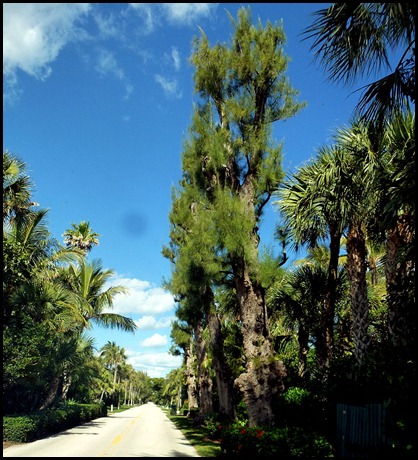 Even though this area is populated by the VERY wealthy,
they did have public beach accesses that were real nice.
We stopped at several to see the beach and enjoyed our packed lunches. 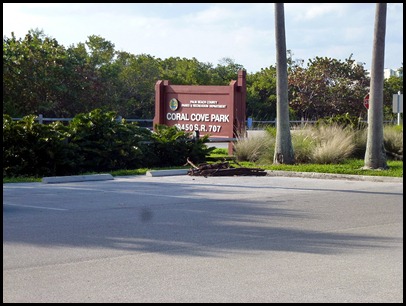 Access to the beach is through long Sea Grape tunnels. 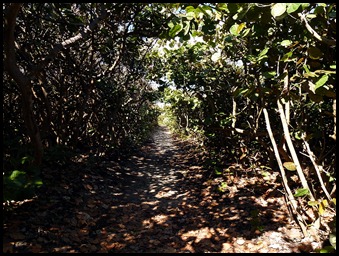 They have very wide dunes!! 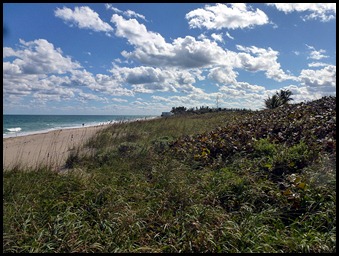 There was a walkway along the dunes with another tunnel through the Sea Grapes:o) 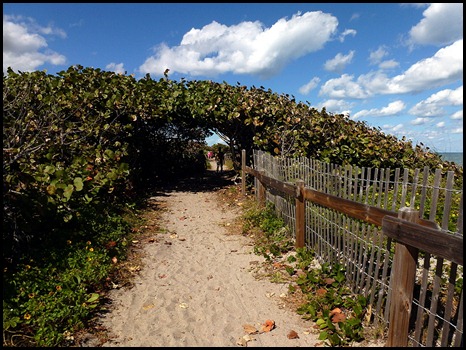 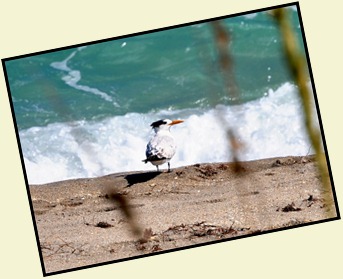 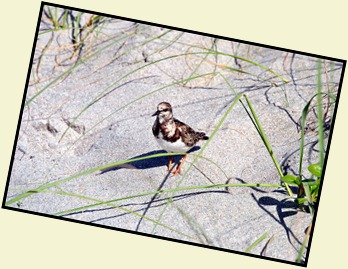 Pelicans against a beautiful sky!!! 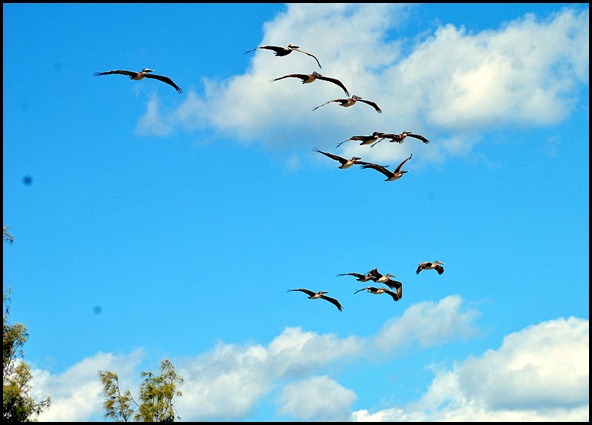 This beach had some large rocks along the shore.
Very lovely to watch the waves crash. 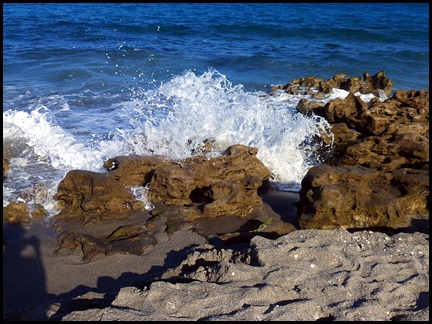 Of course, someone had to climb the rocks…
Yep, Syl was feeling better :o)) 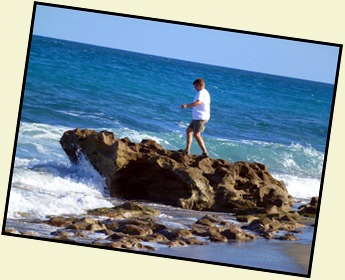 Nancy missed the best photo!!
Just as Syl raised her arms in triumph,
a wave hit the rock and reminded Syl who was in charge;o))
There were few folks in the water and for good reason.
The beach was covered with Man O’Wars which can deliver a serious sting:o(( 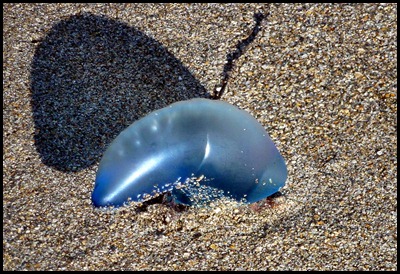 There were also public access areas to Hobe Sound along the western side of the island. We checked them out for a possible snorkeling adventure next week.  Water was warm enough and clear enough so just have to see how this beautiful weather holds out. 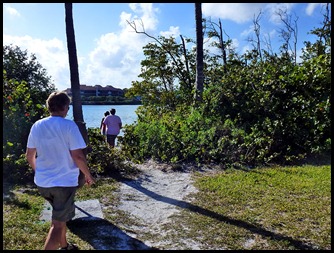 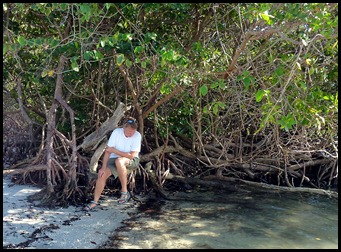 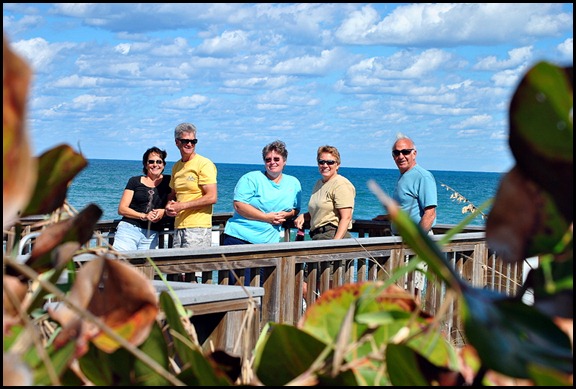 As we came off Jupiter Island and headed south on Route 1 towards the State Park,
we had one other place we wanted to check out. 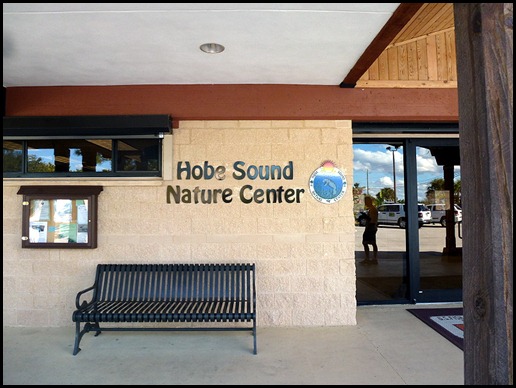 This was a real gem.  They had lots of animals to see, but the best thing was the volunteer who worked here.  She was so helpful and truly loved her job and sharing information with us.  She introduced us to a couple of things we would be seeing when we get to the Everglades.
Burmese Python 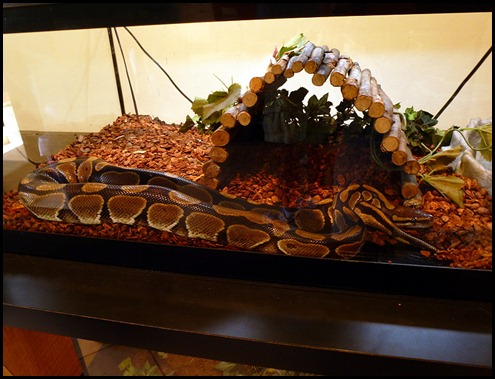 Sure hope the only one we see is in a cage;o((

Next we got to compare the Alligator (top) to the Crocodile (bottom). 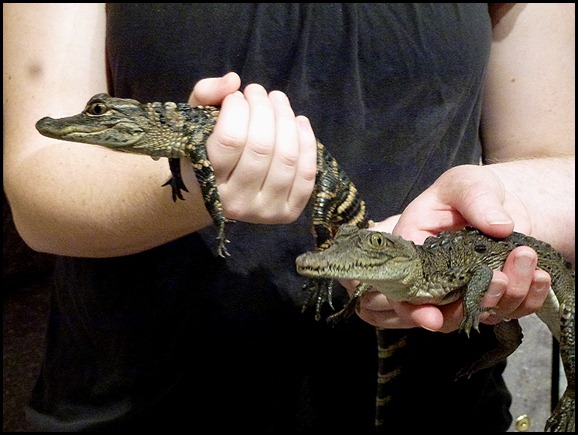