Day 1 - Travel Day to Flamingo Campground
We have wanted to spend time in the Eastern Everglades, Flamingo Campground, in particular.  However, we were not up for boondocking in the Van.  Now that we have the motorhome and Flamingo has added electric sites, we made our reservation for 2 weeks.
To get there, you need to get to Homestead, FL which is south of Miami.
From there you hang a right and travel another 50 miles to reach Flamingo Campground. 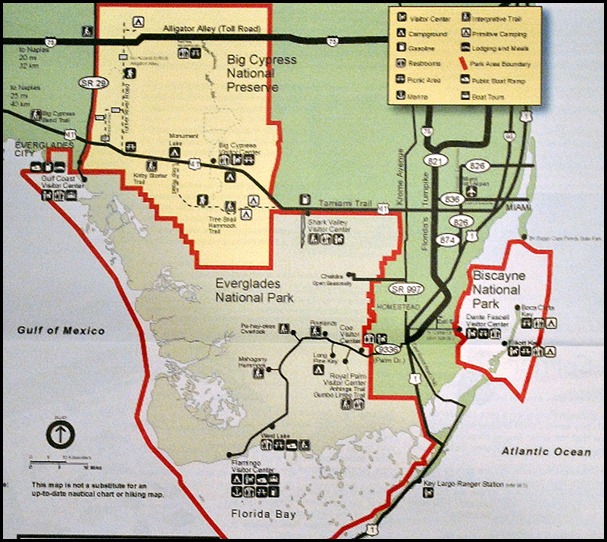 Most people would travel I-95 or the Florida Turnpike
from Jonathan Dickinson State Park to Miami to get to Homestead.
We just didn’t want to deal with all the traffic,
so we headed west toward Lake Okeechobee.
It was a pleasant ride through horse country and along the Okeechobee Canal. 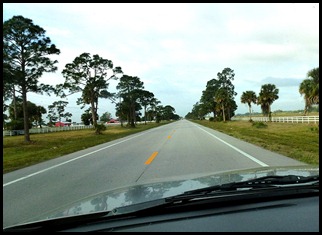 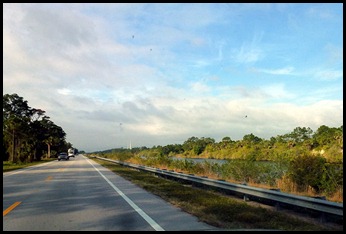 When we reached the locks at the Lake Okeechobee, 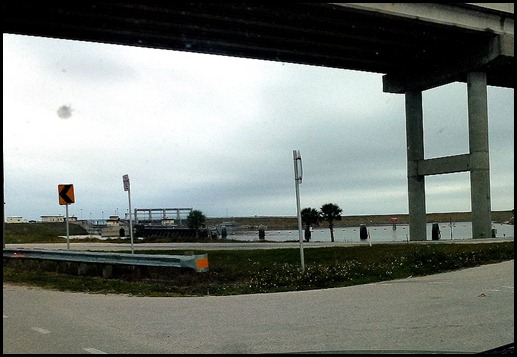 we made a left on Rt 15 and headed south along the lake. 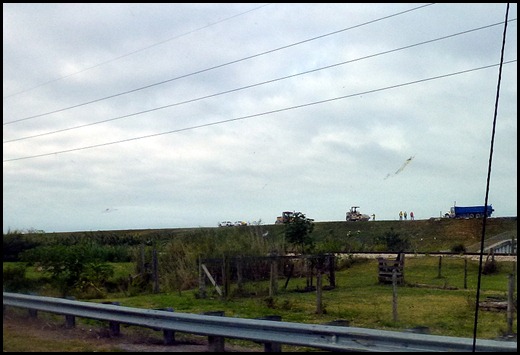 We never saw the lake but we did see workers at the top of the lake berm.
We traveled Rt 15 to Rt 27 which runs through mile after mile of sugarcane fields!! 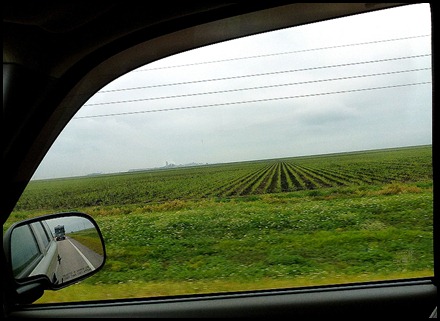 We saw truck after truck hauling sugar cane to the processing plants. 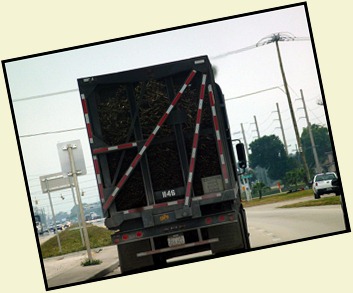 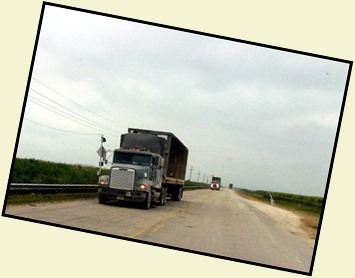 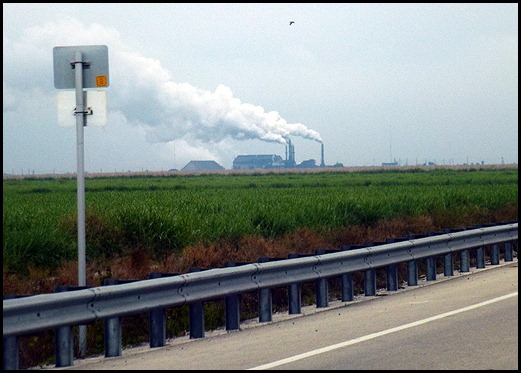 It was a nice easy ride with NO traffic!!
Along the way, we stopped at this boat launch area to take a little break. 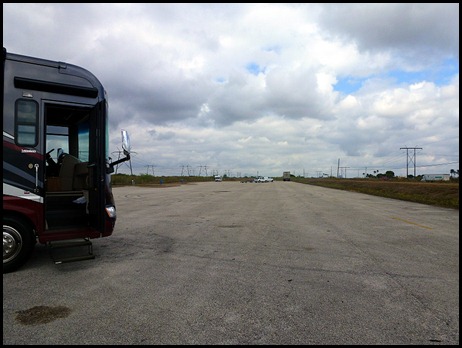 If you look in the far left hand corner, you can see a Class C motorhome.
It appeared to be boon-docking there.
I love this photo of the Class C with its WINDMILL against a backdrop of the power grid!!! 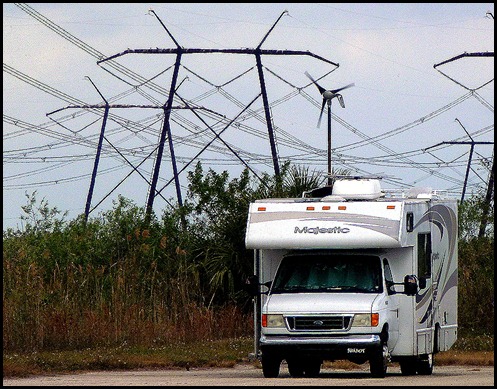 About 100 yards from the Class C was a boat launch and fishing pier:o)) 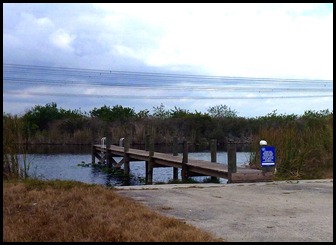 He's got a pretty good set up:o))
We continued down Rt 27 until we were a short distance from Miami.
There we hung a right on Rt 997 to Homestead. 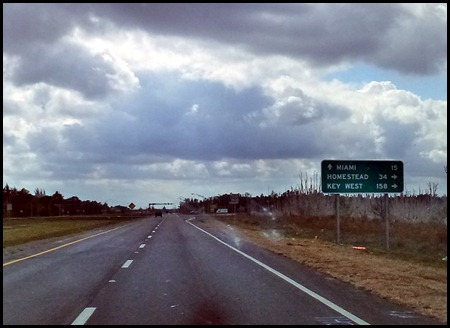 Where Rt. 997 crosses the Tamiami Trail, Rt 41,
there is an Indian Casino on one corner and a truck-stop on the other. 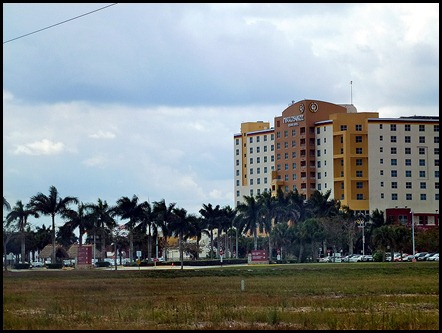 We stopped at the truck stop for diesel and gas;o((
We would not do that next time.  It was difficult to get in and out.
We now know that there were plenty of stations closer to Homestead that
we could get in and out of much easier!!
After we crossed Rt. 41, the ride down 997 is through the agricultural belt.
Field after field of fresh vegetables, fruits and flowers.
Papayas 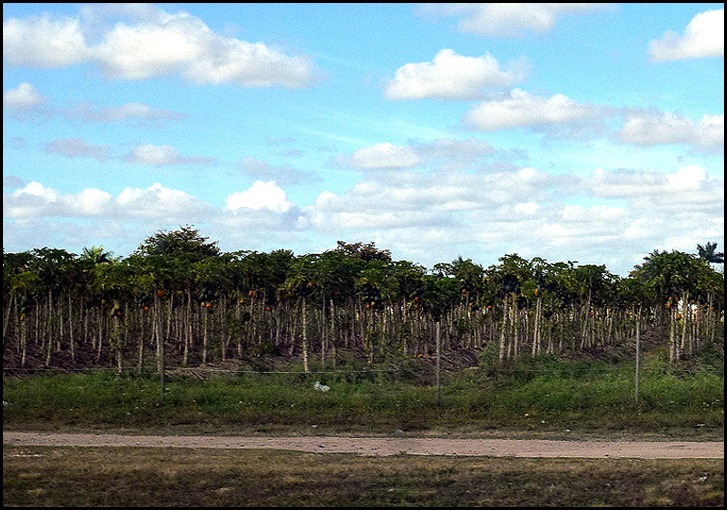 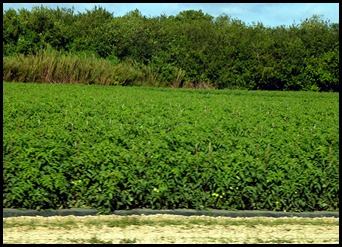 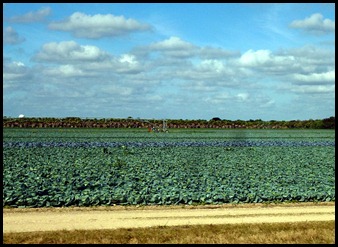 We had been told to wait until we got through Homestead 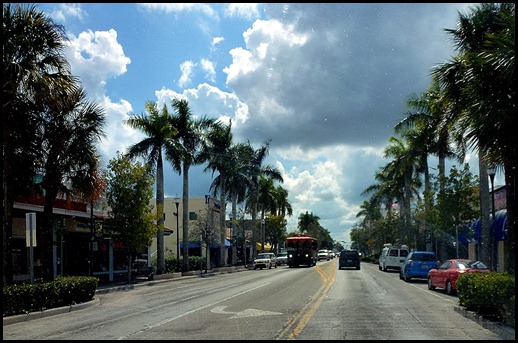 to get our produce at “Robert Is Here”  fruit stand in Florida City.
This is a local treasure with a great story!! 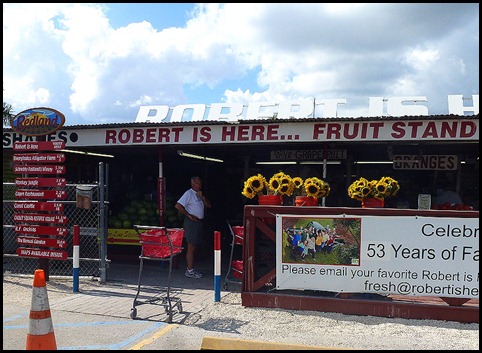 We got here just about lunch time
and
loaded up on lots of beautiful, fresh vegetables and fruits.
There was plenty of room to park a big rig:o)) 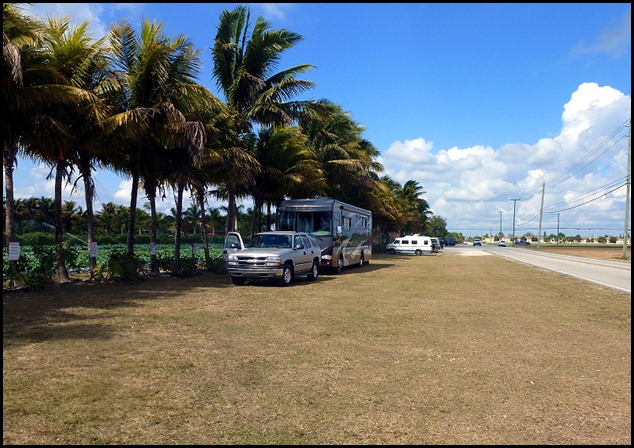 Since it was lunch time,
Nancy made us a  fresh tomato sandwich  while we enjoyed this view!! 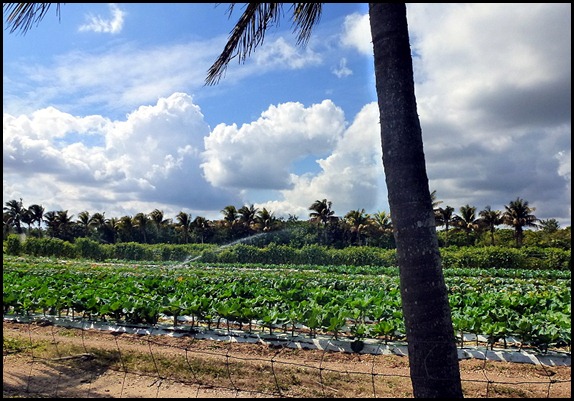 I am sure we will return to ROBERTS before we leave!!
About 10 miles further down the road,
we reached the Coe Visitor Center which is the first stop in Everglades National Park.
After looking around, we headed down the road for 38 miles 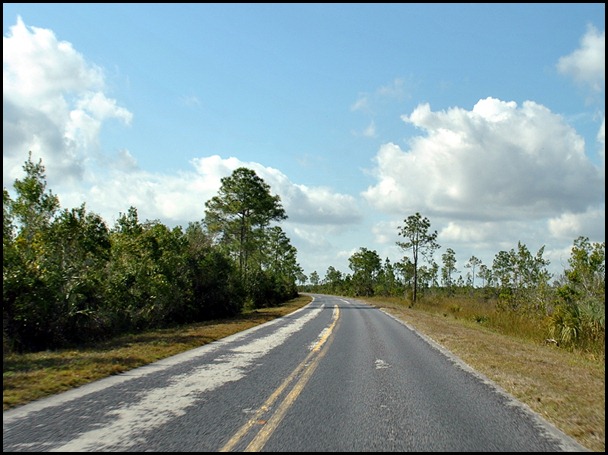 to the Flamingo Visitor Center. 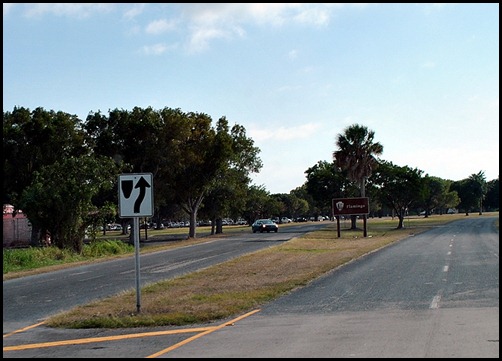 The 38 mile ride to Flamingo was very enjoyable.
We had picked up two hitch-hikers at the Coe Visitor Center. 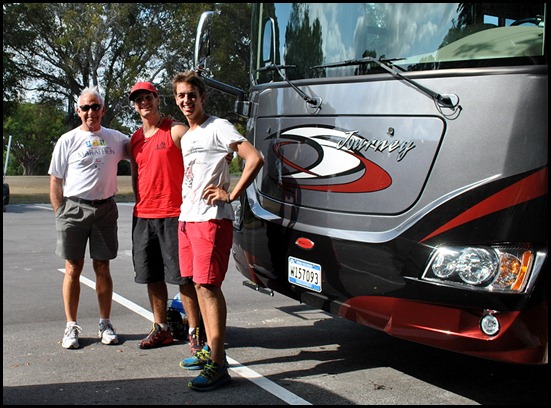 These two young men are from Austria and had just finished exams (graduated high school).  In Austria, they have mandatory military service before they go to work or college.  They must report 2 months after graduation.  They decided to see some of the world before then.
At the Coe Visitor Center, we saw them sitting on a bench, slicing oranges.  There were two bikes near by, so we figured they rode here from Flamingo.  When we asked, they said they had rode from MIAMI!!!  Now, that’s a 60 mile ride with the wind in your face.
They asked if we were going to Flamingo and if so, could we give them a ride??  We said we could take them, but had no room for the bikes.  In an instance, they locked the bikes to a tree and said… ”Great, we’ll get the bikes when we get back!!”
We loaded their other gear into the Tahoe with Nancy and the boys rode with me in the Journey.  I learned that they had been to Uruguay, Argentina, Brazil and most recently to Los Angeles. In LA, they rented a car and drove a 2000 mile loop to see many of our National Parks.  They hiked to the bottom of the Grand Canyon where the temperature was minus 5 degrees!!  From LA, they flew to Miami, rented the bikes and pedaled to where we met them.  They planned to spend a couple days experiencing the Everglades then pedaled back to Miami, fly to Newark-NJ, tour New York City, catch a train to Buffalo to see Niagara Falls and then fly back to Austria. Now that’s some two month trip!!! 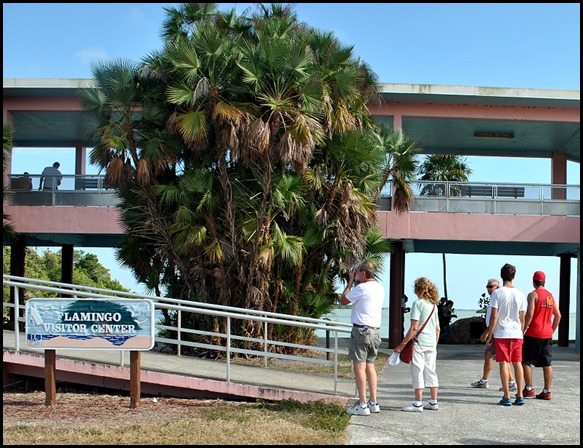 We all stopped at the Flamingo Visitor Center before heading to the campground where we parted ways.  They were staying in the the walk-in tent area and we had reserved a site with electric hookups in the T-Loop. 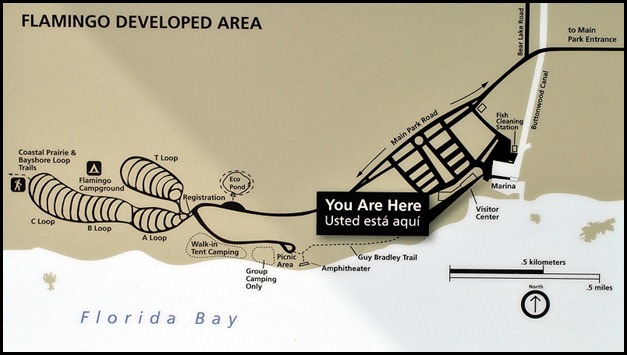 We found our site #19 and spent the remainder of the afternoon getting setup. 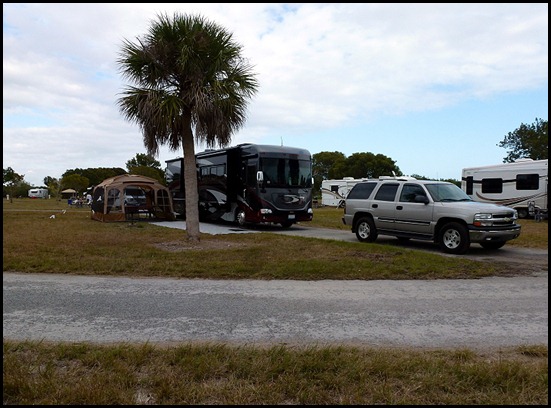 The first thing you realize is you are completely disconnected.
No cell phone, no Internet and no television!!
I think we're gonna like it here;o))
at 5:00 AM