Today, we started our day with a bike ride rather than a walk since we planned on hiking later this morning.  Of course, we headed to the visitor center to take our daily photos of the weather, tides and events boards.

We locked our bikes to the rail right next to these unique palms. 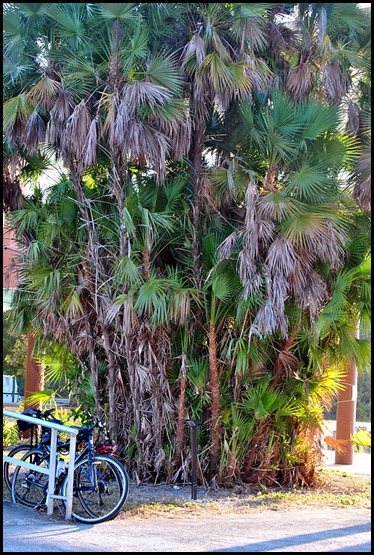 So nice that they have descriptive signage to help us learn:o)) 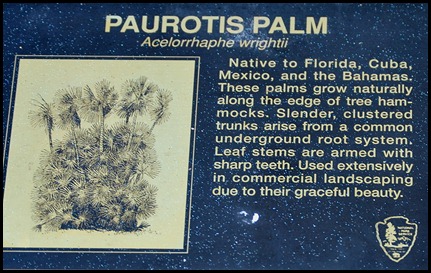 Can’t beat starting the day with a wonderful view of Florida Bay!! 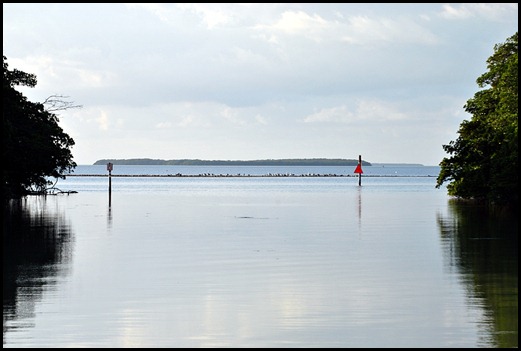 This Snowy Egret is waking up and waiting to catch breakfast. 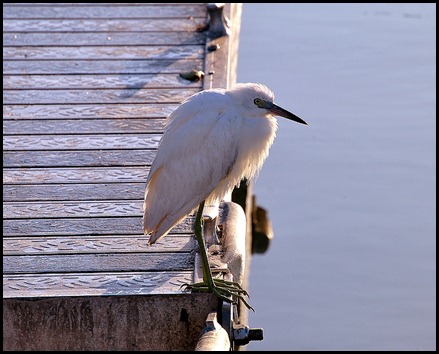 After our bike ride and finishing breakfast,


we met up with Sherry and David to hike the Bayshore Loop Trail. 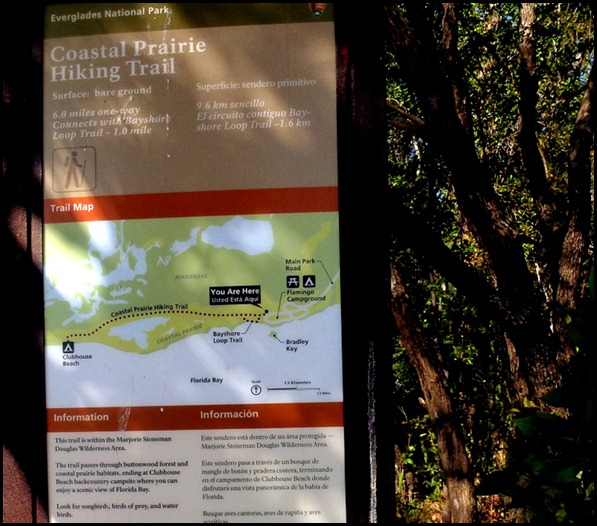 The Bayshore Loop trail is a mile loop through the mangroves.


It loops off the Coastal Prairie Trail which begins behind the “C” Campground loop.


Sherry and David have been here a week and attended many of the Ranger Programs
where they have learned a lot about the Everglades.
Therefore, we had our own personal tour guides!! 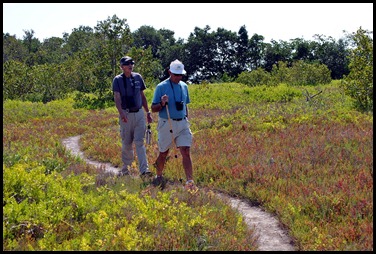 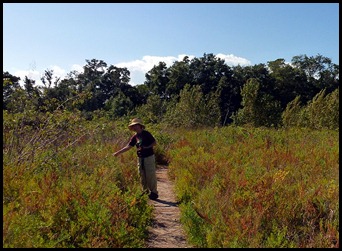 The hike begins and ends across the Prairie. 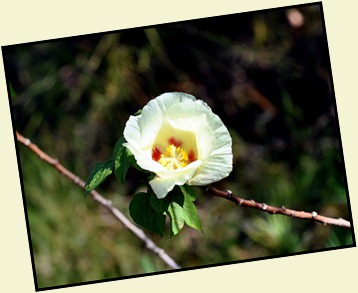 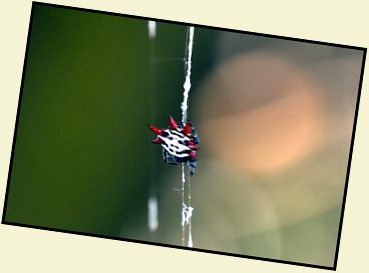 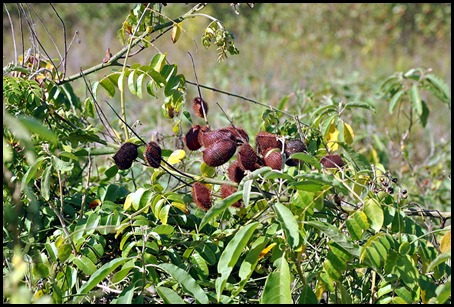 Then we headed into the mangroves. 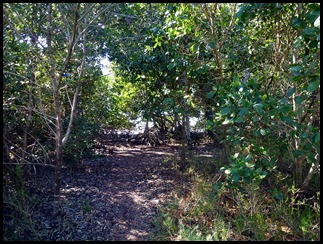 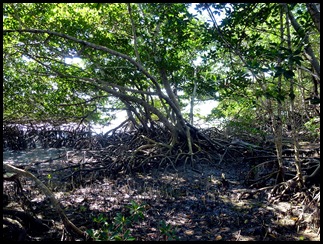 The Mangroves really ARE the Everglades. 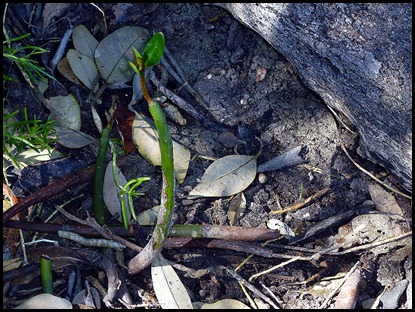 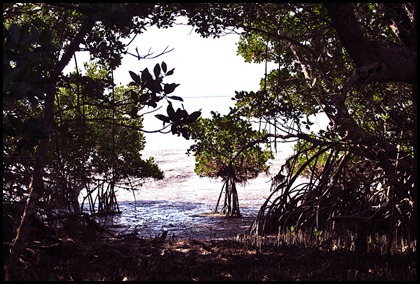 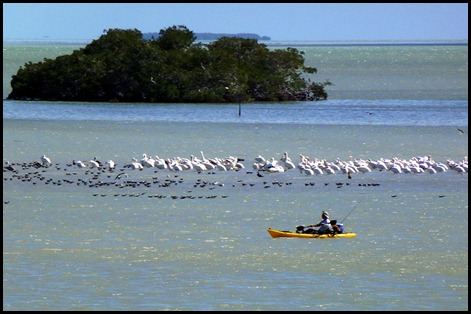 Our walk through the Mangroves provided us a few peaks of the bay. 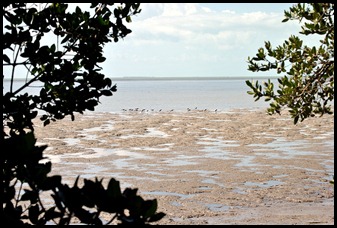 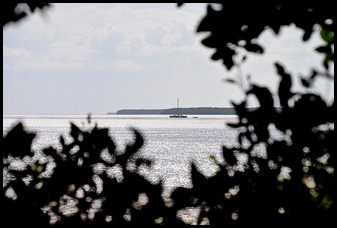 You cannot walk along the edge of the water.
If you get too close, you will be knee deep in mud;((

As we came out of the Mangroves, we hit the trail sign. 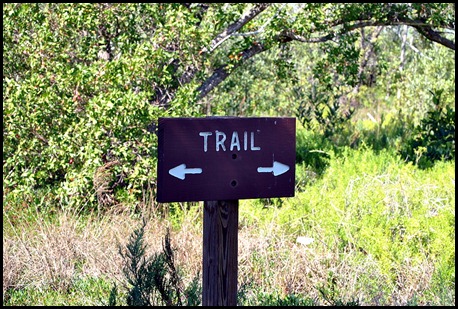 Head to the left, 5 miles to the end then 6 miles back;-O

Since we hadn’t packed a lunch and we had afternoon plans,


we enjoyed the beautiful 1 mile walk to the right!! 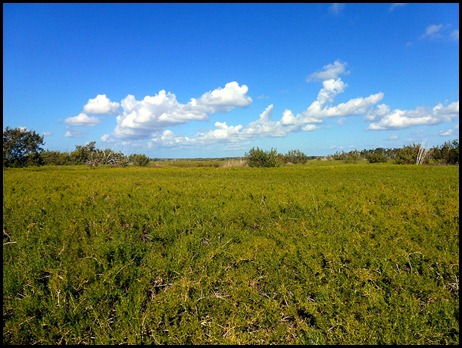 Every afternoon about 2pm,
there is an educational program about some topic relative to the Everglades.


Todays topic was the Python!!


Of course, we were visiting during the Great Python Hunt of 2013.  Actually, the hunt was taking place everywhere in Southern Florida, except Everglades National Park.  There is NO hunting in the National Park.  Before we got to the Everglades, we couldn’t help but wonder and worry a little about encountering a Python.  The media made it sound like they were everywhere.  So a little education might be helpful!!


We gathered under the Visitor Center where we heard a lot about Pythons.  First, they are large snakes but do not see humans as a food source.  That sure was nice to hear:o))


This photo is of a 12 foot python skin. 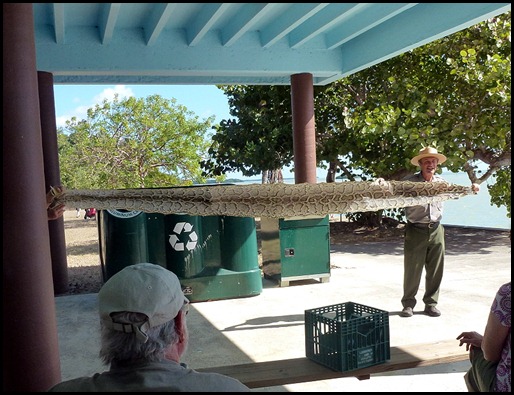 A closer look and you can see what a beautiful snake they are! 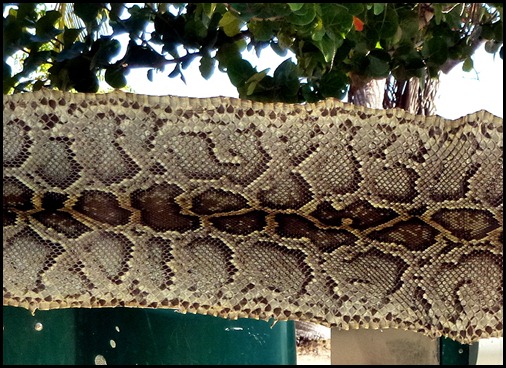 A look at the skeleton of the head and you know this is a formidable snake!! 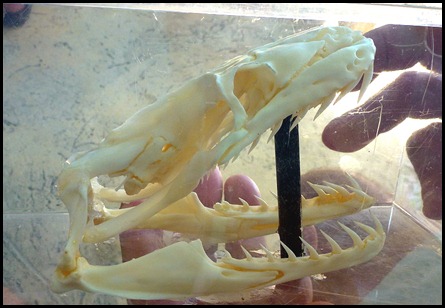 They are a non-native species which has changed the Everglades. It is believed that they were introduced by pet owners who set them loose when they became to large to keep in their homes.  Also, some were probably released when pet stores were severely damaged during hurricanes.   Regardless of how they got here, they have affected the environment.  First thing you notice…there are no rabbits, raccoons, squirrels and other small animals to be seen.


How many pythons are there??  No one really knows.  The Everglades is about 1 million acres and there is no way to count or even estimate the numbers.  Could be 10,000 or could be 100,000 or more.  Most of the rangers have seen at least one, but very few visitors ever see one.  We did not and that’s just fine:o))


You probably have heard or seen the story about the largest one that they captured.  It was over 17 ft long.  The ranger told us they captured it when they STEPPED on it.  These snakes are very difficult to see!!  So trying to hunt, capture or kill this creatures is an impossible task.  They are working on a solution, but it may just take nature itself to fix this problem.  If the Python runs out of a food source, their numbers will diminish.
In the mean time, do not let the Media Hype deter you from visiting the Everglades.  We visited for two weeks, hiked and kayaked several trails, spent time near many ponds and in the campground.  We only saw two small gray racer snakes and they were running from us:o))
This is a marvelous National Park and the Pythons are NOT roaming the streets or trails!!