It’s a new year and time to get back to our early morning power walk.
We got up and got started early enough to see the moon just before sunrise. 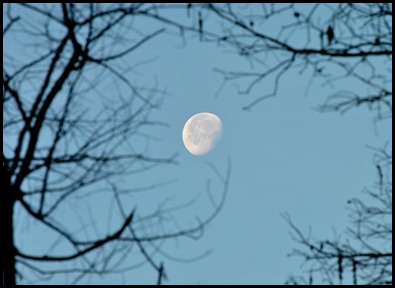 It has been a few days since we power walked, so we took it a little slower than normal.
We stopped for a little break to take pictures of the beautiful sunrise at the spring. 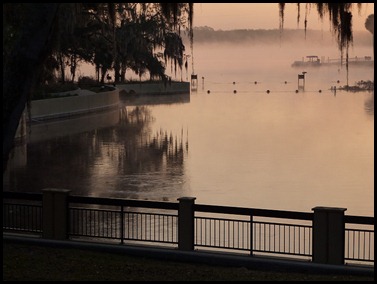 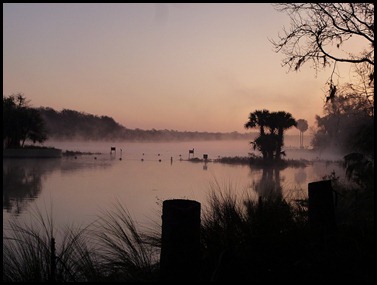 There was even a Turkey amongst the Turkey Vultures;o)) 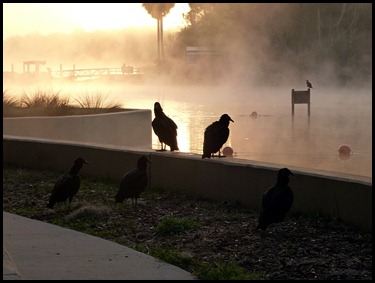 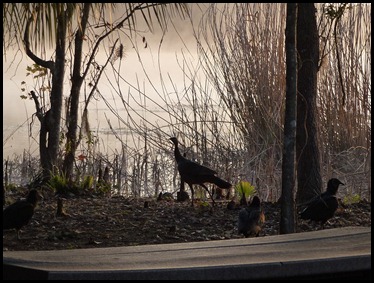 There are some of the most amazing Live Oaks surrounding the springs. 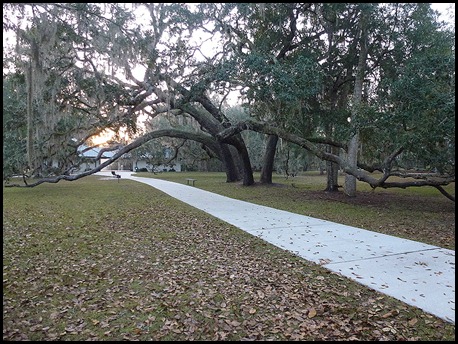 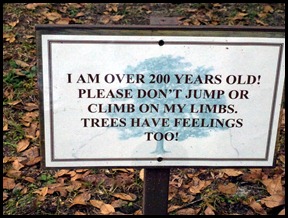 We’ll get back to a good aerobic pace in short order,
but it doesn’t hurt to take time to see the beauty;o))


We have also neglected our bikes lately.  Nancy has set a personal goal of 10 miles per day.  That’s pretty optimistic, but don’t tell that to Nancy…she’s got a way of making things happen;o))

Nancy here:  I’ve got a ways to go to get 70 miles this week;o))  Day one, 5 miles…. Day two, 6.5 miles…  It’s suppose to rain today so we will just have to see what happens.  It is just amazing to me how we seem to have less time to get things done now that we are retired?!?!  But one thing I have notice since I retired last February is that I am not as fit.  Now don’t everyone bust a gut laughing…but I worked 40 hours a week standing and lifting stuff for all those hours.  Since that has stopped, I’ve notice a definite lost of strength and stamina.  Well, I know that can be fixed… so my New Years Resolution is to up the ante on my exercise:o)))  We'll see how it goes.......


Yesterday we met two couples across the street that just ordered Sea Eagle Kayaks.  I told them we were going to get ours out today and they wanted to watch me blow it up.  So when we got back from our walk, I got the kayak out and immediately, I had an audience. 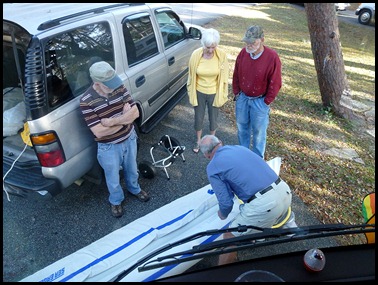 They are so excited and can’t wait for theirs to arrive.  If we are still here, we told them we would be glad to help them out on their first voyage!!

Nancy packed a lunch and we walked to the boat ramp which takes you through the Primitive Camping Area. 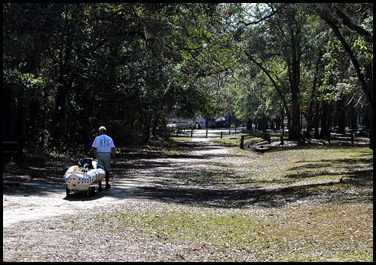 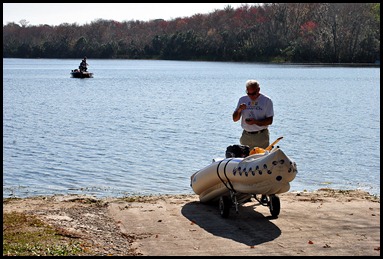 When we arrived yesterday, New Years Day, the area just outside the spring (the spring run) was filled with boaters and kayakers watching the manatees.  We wanted to do the same today and were hoping that there would be much less traffic.  When we arrived at the spring run, there was just one fishing boat:o))

We launched and paddled over to the area just outside the springs.  This is where the manatee were yesterday.  There were no manatee, but a Bald Eagle flew right over our heads.  It happened so fast that Nancy didn’t get a photo;o((  But this fellow was up close and personal:o)) 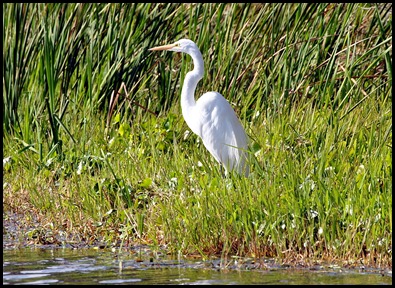 We decided to paddle the coastline along the Spring Run for a little while and see what we could see.  Perhaps the Manatee had moved to other feeding grounds.


We saw Turtles, a Little Blue Heron and an Anhinga.
﻿ 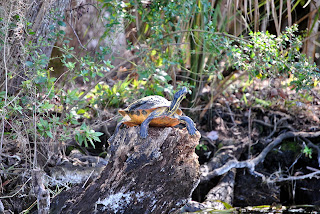 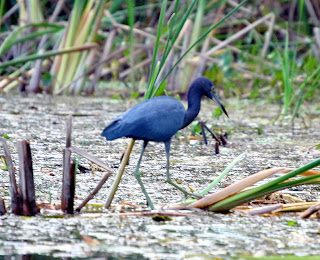 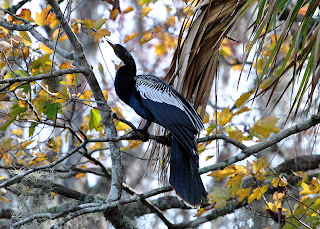 Further down the run, we saw a huge flock (or whatever you call them) of ducks. 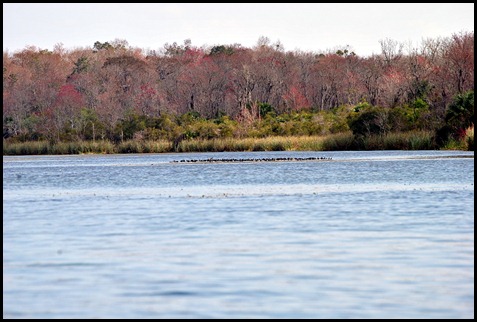 As we got closer, we could tell they were American Coots. 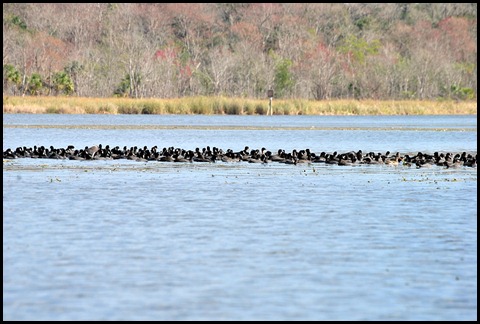 I paddled very slowly towards them as Nancy was snapping photos.
When we got one paddled too close, hundreds of Coots took off at the same time!!!
One of those “National Geographic” moments!! 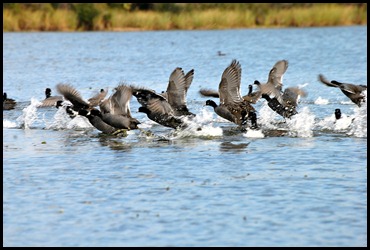 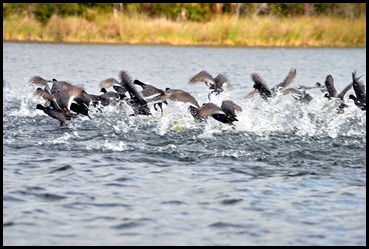 We crossed the Spring Run and paddled the coastline back toward the springs.  Just when we got to the spot they had been yesterday…EUREKA!! We spotted quite a few manatees.   We just sat still in the Sea Eagle, paddled occasionally to reposition and watch these wonderful animals.  What a site and what a pleasure!!  They were next to us, under us and all around!!  A few were as big as the Sea Eagle!!  Nancy was having a hard time getting a picture as she had her zoom lens on the camera and they manatee were too close;o((   She still managed to get a few photos of these LARGE mammals.

The snout is about all that comes above the water. 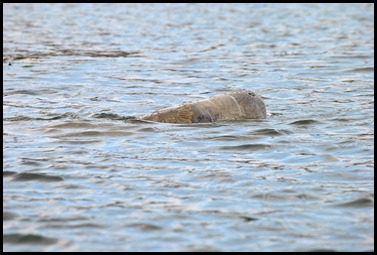 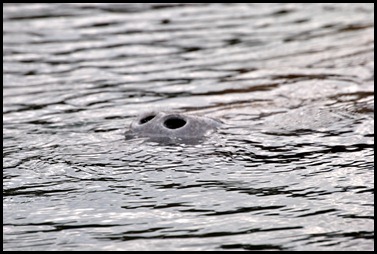 This one was as big as the Sea Eagle.
Unfortunately, it had some scars from motorboat propellers:o(( 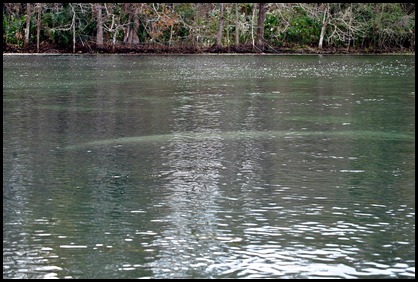 She got these shots of their tail as they went under the Sea Eagle;o)) 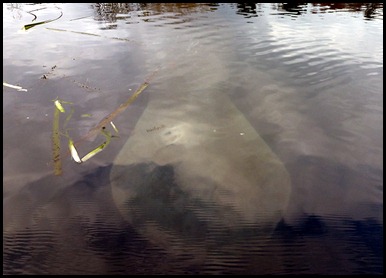 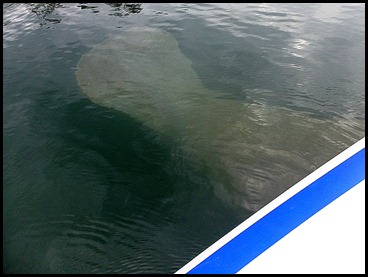 Before you know it, we had spent over an hour watching these wonderful creatures.  The temperature was hovering near 80 degrees and the winds were light.  What a spectacular day on the water!!

We got back to the motorhome about 3pm and as promised, Nancy hopped on her bike.  While she rode, I tinkered with the kayak and enjoyed a little R&R.  What a great day to kick off the New Year!!  Our plan is to do a repeat performance one or two times before we leave!!
at 1:59 PM